In 1990, an old song appeared in a couple of memorable movies, in the process introducing itself to a new generation. On the soundtrack of Goodfellas it was performed by Vito and The Salutations, but it made a much bigger impression in another film — Ghost, starring Patrick Swayze and Demi Moore. That movie appearance helped make a big hit of the Righteous Brothers’ version of “Unchained Melody.” (Video below.)

But the song had actually been around for a long time, and had appeared on the charts with versions by everybody from rockabilly’s Gene Vincent to Les Baxter’s big band. Ironically, the tune originated as the theme from an earlier movie, 1955’s Unchained, which was an otherwise 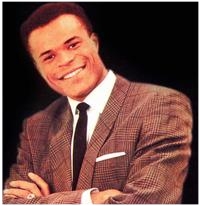 undistinguished prison film. The song was nominated for an Oscar but didn’t really get a lot of attention. However, through the years it has become one of the most recorded songs in modern pop history, with an estimated 500 artists trying their hand.

One of the earliest – and best – of those versions arrived early in the life of the song, when R&B singer Roy Hamilton was one of the first to record it. His version of “Unchained Melody” ended up as his biggest hit, breaking into the top ten on pop charts and reaching number one on the R&B side.

Hamilton is not much remembered these days – his career was sadly cut short by his death at the young age of 40 – but he was very influential. He came from a background that included time spent in the boxing arena, but he was also well-trained in music — both gospel and the classics. He dedicated himself to a musical career, and his talent began to draw attention in the late 1940’s and early 1950’s on songs such as “You’ll Never Walk Alone” and “Ebb Tide,” before he hit it big with “Unchained Melody.”

He also had lesser hits with “Don’t Let Go” and “You Can Have Her,” but his health began to fail and he took time away from music for a while. Eventually returning to singing, for the next decade he had limited success but kept working, until his health worsened again and a stroke led to his death

in 1969. Although his name is not heard often, he certainly inspired many other singers, including Jackie Wilson — and maybe even the Righteous Brothers with their brand of ‘blue-eyed soul’.