I’ve written before about how appealing California was to me as a Midwestern teenager in the 1950’s, but my fascination with the golden West didn’t end with the decade. As a young man in the early 1960’s I continued to find myself intrigued by some of the things happening out there, especially those of a musical nature.

Although the British musical invasion was beginning to attract a lot of attention, the surfing sound – sometimes called beach music – was also making a strong bid for the loyalty of pop music fans. There were lots of talented groups around California and tons of great songs that seemed to personify the new sound. 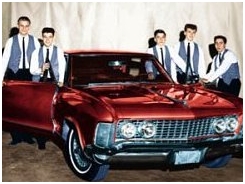 Local bands such as the Beach Boys gave us “California Girls,” and transplanted groups such as the Mamas and Papas contributed “California Dreamin’,” but there was one tune that really nailed the California sound. The funny thing is that the song was recorded by an Indiana band.

Although I didn’t realize it at the time, the Rivieras actually originated in South Bend, Indiana, so as a fellow Hoosier I might have been even more appreciative of their one big hit, “.” But I didn’t really need the connection because it was a great song all on its own, and has been described as “one of the last great gasps of pure American rock and roll”.

The original Rivieras included Doug Gean on bass, Otto Nuss on organ, Bo Fortson and Joe Pennell on guitar, and drummer Paul Dennert. In the early days they were a successful local band in Indiana, but hit the big time nationally when they took a song had originally been recorded by R&B artist Joe Jones, and added some pizazz.

The now familiar drum opening, followed by sizzling guitar licks and a pounding organ, appealed enormously to listeners at that time and is still a great sound. The song climbed the charts and was kept from the top spot only by a British group with the odd name of the Beatles.

As for the Rivieras, they hung around for a couple of years and had some good records but nothing

approached the success of that one big hit. The band’s members went their separate ways in 1966, although some of them did get together for a while twenty years later, playing a few dates but with limited success. They had peaked many years before, with that one special song.

One thought on “The Rivieras: California Beach Music – Hoosier Style ”