When Melody Breyer-Grell generated her debut album, The Right Time, in 2004, her singing might have been something a little different for many listeners. Those who were used to the gimmicked-up sound of today’s singers would have found themselves listening to someone who simply sang, ably backed by solid musicians but absent the studio-applied effects that so many singers seem to require.

The album proved to be a success for the New York area songstress, receiving strong reviews in addition to being listed 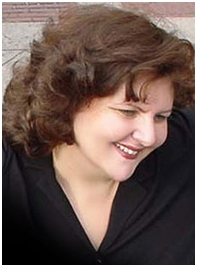 among the top five vocal albums of the year by All About Jazz-New York. For her follow-up, Fascinatin’ Rhythms, now out on the Rhombus Records label, Melody gives us a baker’s dozen tunes from Gershwin, a choice that will please many who enjoy the standards.

She’s in full torch singer mode here and is accompanied by some solid musicians, including Glorida Cooper on piano, Dean Johson on bass and drummer Matt Wilson, but it’s saxophonist Don Braden who stands out. Melody understands the appeal of interweaving lush sax play with her vocalizations, and the two have some nice moments on several tracks.

But this is after all a showcase for Melody, and her strong, straight-ahead voice will please most listeners. Some – especially those more used to the type of conventional singers mentioned earlier – might prefer a softer style, but Melody leans more to boldness.

I enjoyed most of the tracks, especially “Nice Work If You Can Get It,” along with the title tune, “Fascinatin’ Rhythm,” which grew better with repeated listening. Another good piece, and one that provides an added dimension, was “I’ve Got A Crush On You,” which invites comparison to Linda Ronstadt’s more familiar version.

There were some other good listens, including a few of Gershwin’s lesser-known songs, but my top pick for the album is “But Not For Me.” It starts with a long sax solo that leads into Melody’s throaty voice and wistful interpretation, perfectly evocative of how this classic song might have sounded when performed in a smoky lounge in the original jazz age.

Melody Breyer-Grell has crafted a solid follow-up to her debut album, and those who appreciate a traditional old-school singer will find a lot to like here.