I’ve written before about my affinity for some of the early movies of Elvis Presley, and especially Blue Hawaii. Even though it can be viewed through the prism of hindsight as Hollywood phony and politically incorrect to the Nth degree, to a teenager in small-town Midwestern America at that time it was very appealing.

I was actually in my late teens by then and should have been old enough to know better, but I really enjoyed the movie. The music was pretty good too. The title song along with tunes such as “Moonlight Swim” and “Hawaiian Sunset”  entertained members of the audience, and a lot of them (like me) later bought the soundtrack album.

Apparently I wasn’t the only one who enjoyed seeing Elvis in Hawaii, since he revisited it a few years later in the inferior film Paradise, Hawaiian Style, and then later still it was the site of his Aloha From Hawaii concert.

But even though I always felt that Blue Hawaii was one of Elvis’ better cinematic efforts, it wasn’t until I was recently going through some old pictures that I realized how much I’d been affected by the movie. I found a picture taken the same year as the movie came out, and it’s of me proudly modeling what was obviously a brand-new Hawaiian shirt!

It couldn’t have been a coincidence – showing up in a new Hawaiian shirt around the same time the movie came out – but I have no memory of how I got the thing. Possibly local stores stocked them, or maybe I sent away for it, but I was obviously as pleased as punch to be wearing it. 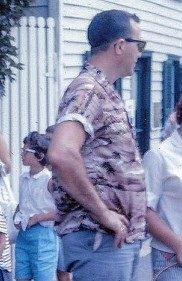 I also have no idea how long it remained part of my wardrobe, but I do have a couple of clues. For one thing, like most teenagers I was susceptible to peer pressure, and all it would have taken for me to dump the shirt would have been a snicker from one of my friends.

The second clue is that I found another picture, taken a year later. It’s a group photo with my Dad in the background — and he’s wearing the shirt. It’s tucked into his work pants, the sleeves are rolled up, and the pocket is no doubt stretched out and stuffed with cigars, all signs that it had turned into a weekend shirt for him.

I suppose that eventually it ended up in the rag bag, but I sometimes wonder about it. After all, vintage Hawaiian shirts are hot collectibles these days, and some are worth hundreds of dollars, so maybe — naaaah.