If you set out to build yourself a country music star, one of the most important steps might be choosing a suitable name. You might even pick something like Ferlin Husky, which sounds like the perfect moniker for a country music singer. But it turns out that the fledgling singer born with that name chose to go a different way early in his career, and actually had at least two alter egos.

Ferlin Husky was determined to make a musical career for himself. He’d learned to play guitar as a child in rural Missouri, and during World War II entertained his fellow servicemen. In the post-war years he found work as a DJ and part-time performer — sometimes calling himself Tex Terry — and eventually made his way to the Bakersfield, California, area. It was a region rich with a burgeoning honky-tonk sound, and young Ferlin soon began finding work as a singer. But it was also decided that Ferlin Husky was too “country”, so he began working under the name Terry Preston. 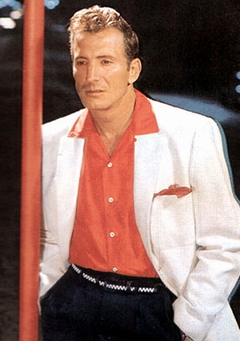 Success didn’t come his way at first, and he kicked around until the early 1950’s when he finally managed to secure a recording contract — and he also started again using his real name.

As Ferlin Husky, he still struggled at first but fortune began to smile when he teamed up with Jean Shepard to record “A Dear John Letter.” The record became a number-one hit for the duo, and helped mark Ferlin as a legitimate country music artist, although it would be a while longer before he followed it up with solo success.

By the middle of the decade he began get some solo records on the charts, and in 1957 his recording of “Gone,” backed by guitarist Hank Garland, became his first number-one solo hit. It established him as a rising country star and was the first of many, but it was also about this time that Ferlin decided to expand his career in a couple of different directions.

He developed another identity as country comic Simon Crum, and the character became very popular. One of his routines, “Country Music Is Here To Stay,” even reached number two on Billboard charts. Not only did Ferlin sign a separate recording contract for the Simon’s comedy routines, but he also made some appearances on TV and even movies, as both Simon and himself.

In 1960 Ferlin hit gold with his biggest seller and best-known song, “On The Wings Of A Dove.” It was basically a gospel song, but it struck a chord with listeners everywhere and climbed to number one on the country charts. It marked a peak for him, although over subsequent years he had good sellers with “Once,” and “Just For You.”

Ferlin kept performing through the next decade, but health problems slowed him down and he even retired for a while. However, the resurgence of country pop and appearances on the Grand Ole Opry and in Branson have revitalized him. He’s still performing today and even recently released a new album.

2 thoughts on “The Many Sides Of Ferlin Husky”