It’s not often that I sit down to review a new album and find that it includes a song that I not only remember, but can clearly recall where and when I first heard it — 50 years ago. But that’s exactly the case with a new release from Capitol, Greatest Love Songs, a collection that spotlights the romantic side of Ricky Nelson. 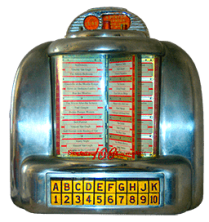 I was in high-school at that time, and a popular lunch spot for teenagers in our small Midwestern city was a large drugstore with a jukebox. The machine was one of those elaborate set-ups that included the individual selection boxes interspersed along the store’s long lunch counter. Remember those little gizmos? You’d flip the tabs and look through page after page of tunes, eventually making your choice and dropping in a coin.

I remember sitting there looking through the selections and noticing a new one from Ricky Nelson. I was a fan of his so I played it, and recall immediately telling a friend, ‘that’s going to be a big hit’. The song was “Poor Little Fool,” and it turned out that I was right — it ended up as one of Ricky’s biggest sellers and is among the tracks included on this album.

That’s just one of several of his familiar hits in this collection — also included are “Hello Mary Lou,” which was another top seller for him, along with “It’s Up To You,” and “Young World.” Also present is the somber and often-misunderstood “Lonesome Town,” which has always been a favorite of mine.

But the album also includes some lesser-known tunes that might provide a different side of the singer, especially for modern listeners. A good example is “Young Emotions,” which was a hit for him but is seldom heard these days. Ricky was 20 when he recorded this, while many of his early hits were recorded when he was 17 or 18, and the song gives us a hint of his maturing voice. A couple of years later came the very apt piece, “Teenage Idol,” with his voice continuing to evolve. It’s a tune that was not a big seller for him, but I always liked it.

Also included here are some of Nelson’s covers of other singers’ hits, such “True Love Ways,” which is nicely done but – not surprisingly – falls a little short of Buddy Holly’s version, and “Dream Lover,” which (warning, sacrilege coming) I actually like as well as the original Bobby Darin hit. Both tracks were recorded in 1979 during the later phase of Nelson’s career, and his voice shows further growth from the early days.

I’ve written about Ricky Nelson before and there are plenty of other opinions about him out there, but most music historians give him his due these days, and consider him an important pioneer in rockabilly and early rock and roll. He always surrounded himself with the best sidemen and chose his music carefully, and he worked tirelessly to make himself a better musician. He left behind a rich legacy, and one facet of that is well represented by this collection of romantic ballads.