He’s seldom mentioned these days, and even at his peak never experienced huge record sales. He also didn’t have the passionate following of other, more politically-minded folk music artists, but Jimmie Driftwood still left his mark on American music.

Born James Corbett Morris in rural Arkansas, he was brought up in an family that included both a folk-singing father and grandfather, in an area of the country that was rich in musical tradition. Jimmie was deeply immersed in the music of his surroundings, but at the same time had his eye on trying to go to college and become a teacher — a difficult proposition during the Depression. 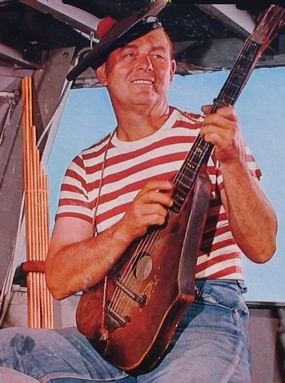 His college years were sort of hit and miss, and included some time on the road with his guitar (reminiscent of Woody Guthrie) but he finally managed to get his teaching degree. Unfortunately, jobs were scarce and he found himself again tuning up his guitar and trying to scratch out a living in music.

Although he had a little success in radio and the occasional talent show, he didn’t progress far down that career road and eventually found a job in teaching, but he kept his interest in music. He was especially fascinated by folk music, and although he spent a number of years as a teacher, he also began to gain some minor fame as a composer and performer of the music of America.

It was during his elementary school classes in history that the idea for what would become his most famous song took root. He was intrigued by the story of the War of 1812 and wanted to help his students become interested. He wrote some lyrics and combined them with a melody that began life as an old fiddle tune, and “The Battle of New Orleans” was born.

It’s a song that’s familiar to almost everyone, but although Jimmie recorded it and sold a few platters, it was Johnny Horton who had the mega-hit with his smoothly presented version. Still, Jimmie began to receive plenty of attention, especially when the song won a 1959 Grammy for Song Of The Year, and it was the first of many notable tunes for the Arkansas teacher.

Jimmie was a talented songwriter and for a while in the late 1950’s and early 1960’s, his songs were all over the charts — but usually by other singers. Other notable compositions include “Sailor Man,” “Johnny Reb,” and “Sweet Betsy From Pike,” but one of the best was “Tennessee Stud.” But again it was a smoother country singer – Eddy Arnold – who had the big hit with his version. (My favorite is a mostly instrumental edition of the song, one that features the skillful picking of Chet Atkins and Jerry Reed.)

Jimmie became a respected and valuable part of country/folk music for many years, but he was revered even beyond his musical talents as people began to appreciate his knowledge of the history of American music. He came to be known as a treasured resource for anyone who wanted to learn more about the roots of American music.

He died in 1998 and his story, which is so much more than what I’ve written here, makes for fascinating reading. (For example, the tale of how he got his name “Driftwood” from something his grandfather joked about.) Here’s a good source for the whole story.