Although Glen Campbell has a well-known history as a big country music star, with mega-hits on songs such as “By The Time I Get To Phoenix,” and “Wichita Lineman,” a lot of today’s music fans might not realize that he started in pop music. They also might be surprised to learn that he’s a talented songwriter, and a serious guitarist who was so dedicated that he even studied the work of jazz pioneers like Django Reinhardt. 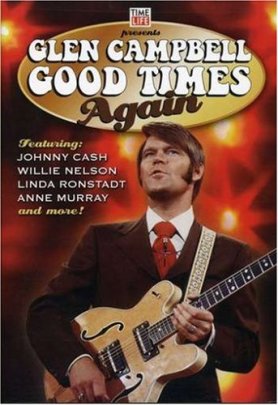 Those were the kind of thoughts that were going through my mind while watching a new music DVD from Time-Life, Glen Campbell : Good Times Again, a 60 minute disc that combines a lot of excerpts from his hit TV show. Although it’s mostly filled with his duets with a number of well-known guest stars (more later about those), it was the talents of Glen himself that often caught my attention.

In the early days of his career he was mostly involved in the pop music side of things, and played with a variety of performers that included the Monkees, the Beach Boys, Frank Sinatra, and even Elvis Presley. But the formula for his own success was built around a lush, pop-oriented country sound that took full advantage of his talent, and that’s on full display in this DVD.

Glen provides an introduction to every performance on the disc, reminiscing a little but keeping it brief. There is something to be said for just allowing the performances to spin along without interruption, especially if you’re interested in immersing yourself into a nostalgic exercise, but I suppose the producers are doing it the right way by having him do that. And if Glenn’s weathered current face is a little jarring to the mood the first time or two he shows up, a comfort level is soon reached.

As with many DVD’s of TV shows from the 1960’s or 1970’s, the roster of guest stars is fascinating for a number of reasons, including the opportunity to see many superstars in their early years, almost as if you’re watching them on live TV. (Keep an eye open for Willie Nelson — you’ll hardly recognize him.)

Some of those performers are no longer around, and the chance to see someone like Rick Nelson in his prime, teaming up with Glenn on “Louisiana Man,” or Ray Charles performing “Cryin’ Time,” is not to be missed. Also of note, Johnny Cash and Glen doing Johnny’s big hit, “Folsom Prison Blues.”

Other highlights include Glen and Linda Ronstadt performing “Carolina On My Mind,” and another duet with a female mega-star, Cher, on “All I Really Want To Do.” Also of interest, Glen teams up with Bobbie Gentry and spotlights an album they did together.

There are some performances you could predict. Glen teaming up with B.J. Thomas on his trademark “Raindrops Keep Falling On My Head,” was nice, but unexceptional. Others were a nice surprise. The composer of “Gentle On My Mind,” banjoist John Hartford, sits down with Glenn on the hit song and we hear it in a different way. Good stuff.

A nice DVD for both content and quality – sound is good, colors sharp and true – and recommended for anyone who would like to experience a snapshot of the era’s pop music.