Woodwind wizard Eddie Daniels is an artist who garners enormous respect from his contemporaries and from jazz aficionados, but is somewhat of a mystery to casual jazz fans. His newest release, Homecoming — Eddie Daniels Live At The Iridium, a 2-CD set just out on the IPO label, offers listeners an opportunity to solve that mystery.

Backed by Joe Locke on vibes, pianist Tom Ranier, bassist Dave Finck, and Joe La Barbera on drums, Eddie brought his virtuosity on both clarinet and tenor sax to some familiar surroundings, the Iridium jazz club in his native New York. (Although he’s been based in the Southwestern US for a number of years.)

During that appearance he and his group gave some outstanding performances, and this double album does a good job of presenting 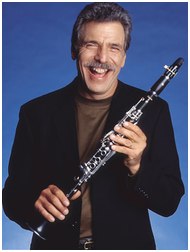 listeners with the opportunity to relive those New York nights, capturing much of the feelings inherent in live shows while maintaining quality sound.

Eddie has been a fixture in jazz for many years, going back to the late 1960’s when he spent several years with the Thad Jones/Mel Lewis group. He was very young – just out of Julliard – and played both clarinet and sax, but as the years passed he began to focus mostly on the clarinet, the instrument that became the foundation for most of his success as both a leader and soloist.

Of course, he’s kept his sax chops sharpened through the years, and when the Iridium opportunity arose he brought all his instruments along. The result is the best of Eddie on both clarinet and sax, and that best is very good indeed. The nearly two hours of music on this twin album provide a plethora of proof. (Always wanted to use that word — plethora, not proof.)

Eddie’s sax is heard throughout the collection, most notably on “Falling In Love With Love,” and another old standard, “Night And Day,” both tunes given new life by Eddie’s inspired and blinding-fast play, reminiscent of the best of bebop. In contrast, his sax softly soars on Ellington’s “Warm Valley,” showing us another aspect of his talent.

Of course, Eddie is first and foremost a clarinet virtuoso, and he doesn’t forget to include example after example of that simple fact. Tunes such as “That’s For Afta,” (his take on “After You’ve Gone”) and the lilting “Chosen Words,” hammer home the fact that he is one of the greats.

He also finds time to pay tribute to his days with the legendary Modern Jazz Quartet, offering up “Deja Vu MJQ,” a fascinating progression of soloists on parade. In the same spirit is John Lewis’ “Django,” a cut that runs for over fourteen minutes and also provides plenty of opportunities for Eddie’s sidemen — with Locke’s vibes of special note.

About the only thing I didn’t enjoy about this album was the cover art. Eddie’s albums seem to be using a series of strange haunting paintings, and they are…well, odd. Oh well, I’ve always said that I don’t get modern art — but I do get jazz, and this is good stuff. Highly recommended.