One of the first words a kid learns while growing up is “naughty”. Grownups use it to tell a kid how to act (or how not to act) and they also use it as a way to deflect questions about other people. For example, whispered conversations about relatives or neighbors often cause a kid’s ears to perk up, only to be told that the people in question did something “naughty”.

While I was growing up, I remember a song that caught my attention when I spotted it on one of the records we had around the house. I’m not sure what I thought I’d discover, but when I read “The Naughty Lady Of Shady Lane” on the label of the record, I knew I had to play it. 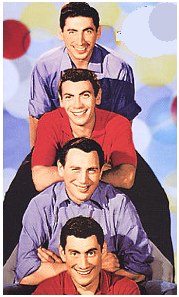 Of course, it turned out that the lady in question was pretty harmless but it’s still a good song, one of many hits generated by the Ames Brothers. The quartet (who were actually the Urick brothers) pretty much owned the 1950’s, with a string of best-sellers that included several number-ones, such as “You, You, You,” and “Sentimental Me,” along with the flip-side hit, “Rag Mop.”

For Ed, Joe, Gene, and Vic, growing up near Boston made it simple to relocate there in the early years, hitting the nightclub circuit and building their following. Their close-harmony, precision sound was very appealing to audiences, and it didn’t take them long to hit it big. As they grew more popular they worked their way to New York and eventually to a recording contract. Successful record sales followed and at their height they even had a TV variety show of their own.

The late 1950’s and the rising popularity of rock and roll affected their career – as it did so many others – and the quartet soon found itself going downhill in record sales. It was about that time that the youngest of the brothers began what ended up being a pretty successful solo career, one that included two different paths.

Ed Ames found success not only as a singer, with his smooth baritone suited especially to ballads such as “My Cup Runneth Over,” but also as an actor. After a few small roles, he landed the part of Mingo in the Daniel Boone TV show, becoming a sort of Tonto-like sidekick to Fess Parker.

That in turn led to Ed’s infamous appearance on Johnny Carson’s Tonight Show, when his hatchet-throwing demonstration took an odd turn. When he tossed the bladed instrument at a target with the outline of a man drawn on it, the result allowed Carson to have a lot of fun at Ed’s expense — the hatchet had struck the figure in an embarrassing (or should we say “naughty”) spot.