As I’ve said before, you really have to hand it to the folks at Time-Life. I can’t imagine any aspect of nostalgia-based media – music, video, or books – that they haven’t covered exhaustively. Their virtual vaults must be stuffed to the rafters, judging from what they’ve made available through the years. You can almost imagine the huge teetering stacks of stuff, just waiting to be compiled into collections for those among us who enjoy reminiscing.

Which brings us to our subject, a new 3-CD boxed set celebrating the golden age of Eastern singing groups, Sound Of The City – New York Area Doo Wop (1956-1966), due out later this month. It’s a collection of almost 60 of the best sounds from that period, and includes just about every song you

might have heard – or heard about – from a zillion different Doo Wop groups.

Doo Wop is a term that might have various meanings to music fans, but it’s generally used to describe the music of rock and roll singing groups of the 1950’s and 1960’s, characterized by the “street-corner” feel and harmonizing. Some groups thrived and their lead singers later became individual stars, while others had very brief moments in the spotlight, but all were part of the musical scene at that time.

It should be noted that this collection features the Brooklyn/Italian-American school of Doo Wop, not the equally vital and important black R&B groups of that era. It also pretty much ignores the many all-girl groups, but the folks who put out this set are probably planning others for the future.

The big names are here, including Frankie Valli and The Four Seasons, Dion, Jay and The Americans and many others, but also represented are some you’ve probably not encountered before. Anyone remember Vito and The Salutations? How about Cathy Jean and The Roommates? Sounds like a pajama party in the planning stages, but the group – formed by junior-high school students in Queens, NY – had a hit with “Please Love Me Forever”. When compared to Bobby Vinton’s later version it sounds a little primitive, but still fun to hear.

That’s just one of several original versions of songs that later became big hits for more famous groups. Another good example is “Barbara Ann”, performed here in its first version by The Regents, but a song that was a much bigger seller later for Jan and Dean and later still, The Beach Boys. 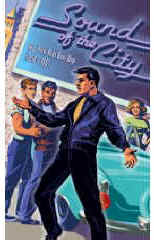 But mostly what you get here are the big mega-hits you’d expect, such as Dion and The Belmonts’ “Runaround Sue” and “Teenager In Love”, “16 Candles” by The Crests, and “Little Star” by The Elegants, just to name of few. (The entire listing of cuts on the 3-CD set is way too big to post in this review, but can be accessed here.)

There’s also some undiscovered history available, with Dion’s very first effort, the previously unreleased “Rooftop Serenade”, recorded at home with a couple of buddies from the pool hall. The sound is about what you’d expect from something recorded on the rooftop, but it’s fascinating to hear the rough debut of a future singing star.

In any case, as always the music is the thing, and this is a rich and varied collection that will have you listening with snapping fingers and tapping toes. You might even want to dig out that old black leather jacket…what, you threw it away?