Poncho Sanchez is no stranger to Latin jazz fans. He’s been voted number one percussionist in both DownBeat and Jazz Times reader’s polls for the past three years, and has been a driving force in the genre for over two decades. But on his new album for Concord Picante, Raise Your Hand, Sanchez – who cut his teeth with Cal Tjader – has performed a skillful fusion of musical styles that might surprise a few. The album, due out in late May, also provides proof that artists and record companies can sometimes form a strong bond — this is his 22nd album for Picante over a period of 25 years. 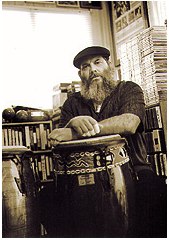 Sanchez has brought together a lot of talented collaborators – including some special guests – and produced a varied mix of tunes that feature his usual Latin jazz sound sharing the spotlight with nostalgic soul and funk. Although Sanchez has a solid background in R&B he has seldom used it as prominently as he does here, combining it with his Latin roots to make an eclectic, but supremely rich and satisfying brew.

The title tune jumps us into the fun, as soul legends Booker T. Jones and Eddie Floyd help create a sound reminiscent of their early years on Stax Records, but in this case with the backing of the Sanchez beat. Good stuff. In the same vein, saxman Maceo Parker, who was part of James Brown’s ensemble for years, takes over on “Shotgun” and again on “Maceo’s House” with his funky, nostalgic tone, and even here the underlying Sanchez sound is always present.

Other guests include guitarist Steve Cropper (featured on “Raise Your Hand” and “Knock On Wood”), and vocalists Andy Montañez and José “Perico” Hernández. In addition, some solid sidemen help Sanchez create his unique sound, among them Javier Vergara on sax, pianist David Torres, and percussionists George Ortiz and Joey DeLeon.

But aside from the funk, Sanchez hasn’t forgotten his roots — or the tastes of his long-time fans.

There’s plenty of pure Latin jazz on hand, with Cuban and salsa sounds that remind us not only his Tjader days but maybe even a hint of another of his inspirations, Tito Puente. Enjoyable cuts include “Tropi Blue” and “Rosarito”, which was probably my favorite of all.

Poncho Sanchez – Raise Your Hand, due out May 22nd on the Concord Picante label.