For a while in the early 1950’s there was a phenomenon appearing on weekly TV, a man who was enormously popular with a wide audience (mostly female). He wore his tailored tuxedo on every show, and his megawatt smile lit up the tiny black and white screen like a searchlight. He was certainly a regular on our TV, and I remember my Mother loved him but I took my cue from my Dad, who seldom watched unless it was to just shake his head and snort.

Everybody remembers Liberace, or at least knows of him and how he performed for most of his career. He was a perfect illustration of the word “flamboyant”, and as far as his music career goes, he probably defined the term “selling out” about as well as any artist in history. But I’d like to get past all that (if possible) and try to determine the level of his real talent as a musician. 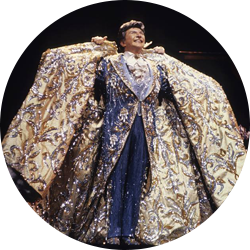 If the stories are to be believed, he certainly started out with musical ability. Wladziu Valentino Liberace was born in Wisconsin to a Polish-Italian family, and a musical one at that — his father had been a member of Sousa’s band and played with the Milwaukee Symphony. Although his instrument was the French horn, his young offspring was trained on the piano, and – so the legend goes – family friend and world-famous pianist IgnacePaderewski saw the young prodigy’s talent and helped pave the way for his further training and musical education. He debuted as a concert pianist at age 11, and by his teens was performing with full orchestras.

However, as he reached adulthood he began to change his musical outlook. He had noticed that audiences responded more enthusiastically whenever he added little novelty passages or encore songs to his classics-heavy performances. Since he was trying to build a career, it only made sense to him to explore the idea, and he soon found that his popularity grew. During the 1940’s he performed in many clubs, then spent time during the war entertaining the troops, and eventually even tried his hand with movie music.

In the late 1940’s he began to have some success with recordings and that continued for several years, eventually leading to his being offered the spot on TV. This is about when I began to be aware of him, as my Mother (along with almost every other woman in America) insisted on having his show on our TV every week. By that time, Liberace had perfected his smiling persona and his ability to play the kind of music his audience wanted to hear, which was mostly light classics and – of course – romantic ballads.

His life and career from that point on are pretty well documented, but the question that remains is, just how good a musician was he? It’s difficult to even find any samples from his early days, let alone critical comments, and that’s a shame because by the time most of his recordings were made, he’d reached a point where he was more about entertaining than about precision of playing. Critics at that time either slammed him, or damned him with faint praise by stating that his talent was being wasted, or that he had some ability but did not work hard enough to be technically proficient. I think that by that time in his career he knew what he wanted to do and how to do it, and although it’s impossible to know what was in his mind I’m guessing he’d made his peace with it. After all, remember that famous comment he’d made about criticism, “I cried all the way to the bank”.

But I’ll always wonder if that talented young prodigy was somewhere deep inside him, wanting to be taken seriously.