This is my second review of an album from a series issued by Prestige Records that features remastered music from legendary sound engineer Rudy Van Gelder. (For the backstory, refer to the earlier Jackie McLean review.) On this album, Sonny Rollins – Plus 4, we’re turning back the clock over 50 years to take a look at the early days of an artist who is still performing regularly even now. 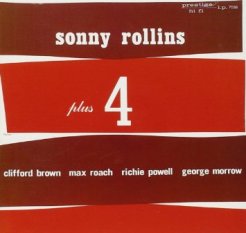 Sonny Rollins is one of the great tenor saxophonists in jazz, and at the time the original album was recorded he was part of the Clifford Brown-Max Roach Quintet. The members of the group were all present on March 22nd, 1956, the day the entire album was cut, but the quintet ceased to exist a few months later when both Brown and pianist Richie Powell were killed in an auto accident.

Rollins went on to make many, many albums through the years as the leader of various groups, occasionally reinventing himself in the process, but the circumstances do make this particular album a little more special.

Brown was only 25 at the time of his death, and was considered a rising talent among trumpeters. On this album, he’s almost a co-star with Rollins as most of the cuts feature extensive trumpet solos and/or interwoven sets with the two of them. Of course, drummer Roach, pianist Powell and bassist George Morrow do some good work too.

If you’re into bebop – or even if you’re not – this is an album that’s important because it gives us a picture of how jazz was evolving at the time. It’s also the perfect example of quality over quantity because although it’s only a little over a half-hour total (possibly because of the truncated existence of the quintet), every cut is first class, and is a fine showcase for the talent of the musicians.

The first cut, “Valse Hot”, is one of the best, and it features Brown jumping right into a tour de force, soon joined by Rollins, who wrote the song. Personally, I’m not a fan of Brown’s style, but there is little doubt that he was talented and it’s a shame he died so young. When Rollins begins his solo the tune really came alive for me, and it’s an outstanding example of his sound at that time.

The second cut, “Kiss And Run”, had a different feel to me — a little more “bebopish” if that’s a word, with Rollins’ quick-time phrasing echoed by more of the same from Brown, and this piece also includes some good stuff from pianist Powell. A couple of familiar tunes follow; “I Feel a Song Coming On” and “Count Your Blessings Instead of Sheep”, for folks like me who sometimes enjoy hearing variations on standards. Both songs enjoyable with my preference probably the latter.

Closing the album is a jazz classic — it’s “Pent-Up House”, another Rollins composition. If there’s a tune that best identifies a special time when a soon to disappear group was at their peak, it’s this one. All five members of the group get their licks in, and it’s a hard bop romp. (Try saying that 3 times quickly.) A “thumbs up” for this album from this particular listener.

One thought on “REVIEW: Sonny Rollins – Plus 4”