Somehow I find myself again writing an article about a crooner, my fourth over the last few months. (1, 2, 3) Country music singer Jim Reeves is my subject in this session, and calling him a crooner might be a bit of a stretch from the term’s normal definition, but it’s a pretty accurate description of his singing style.

Enormously popular for many years, he was often dismissed by country music purists for using his mellow baritone voice on country-pop ballads rather than singing tunes with a harder-edged traditional style. The only problem with that criticism is that it ignores the simple fact that country music – like rock – has throughout its history consisted of a zillion different styles and sounds. And although Jim’s been gone for over forty years (one of many musicians to die by plane crash) he still has plenty of fans who really don’t care how you classify his music — they just know they like it. 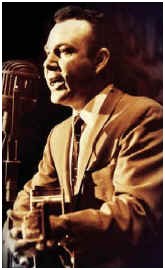 When I was growing up in the 1950’s, Reeves was one of those singers who seemed to always be around, either on the radio or on TV musical shows, and I’m sure we also had several of his records. But everyone had to start somewhere, and when he came out of Texas back in the late 1940’s, his professional baseball dream ended by injury, he scuffled around the music world for a while. He had limited success before finally landing a spot on the Louisiana Hayride — but as the host.

He got his chance to sing when he filled in for Hank Williams one day in 1952. That led to a new recording contract and his first big success, “Mexican Joe”, which hit number one in 1953. He immediately followed that with another top hit, “Bimbo”, and that started a string of successful recordings throughout the 1950’s. But it wasn’t until he revamped his style that he became a true country superstar.

Gradually turning to a softer type of music and employing a smooth singing style more reminiscent of Sinatra or Crosby, he began to build a huge fan base. During this period he even dropped the cowboy outfits for conservative suits, which probably helped create the Gentleman Jim image. Songs such as “Have You Ever Been Lonely” and “Four Walls” reached number one status, along with my favorite, “He’ll Have To Go”. When his private plane crashed in 1964 he was at the height of his popularity and – as often happens – continued to sell countless albums even after his death.

He was as responsible as anyone for bringing country music to a mainstream audience, not only in the US but in many other parts of the world, where he also became tremendously popular. It would be a real shame to get so caught up in disparaging his move to the pop side that we forget to pay tribute to his talent and his contributions to country music.