OK, stay with me now…remember, I said before that geezers have all kinds of musical tastes, so don’t glance at this posting and think nah, I don’t do country music. You’ve got to give this lady a chance to show you that her voice was equal or superior to almost anyone you want to name – in her era or among current singers.

I’ll admit that I became a fan many years after she was gone, and would probably have not been open-minded enough in my younger days to listen to someone I would have considered a “hillbilly” singer. My loss. 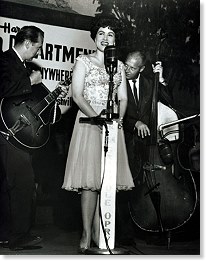 If you’ve liked country music for a while then you’re probably a fan of hers. If you don’t know country music from zydeco you still might have a vague memory of her name – Patsy Cline – but probably don’t know anything about her.

She was a special talent who tragically died in a plane crash at age 30…which might have been the only thing that could have kept her from reaching her full potential. She was already the first true crossover female star, with many of her country hits also appearing on pop charts in the late fifties and early sixties, but we’ll never know where she could have gone from there. It was said of her that if she’d had the proper training she could have starred on any opera stage in the world. She was that good.

Born in 1932, she was singing professionally by her late teens, and by the time she was in her twenties she’d been featured on the Grand Ol’ Opry and also on many TV shows, including Jimmy Dean’s and Arthur Godfrey’s. In 1961 she was involved in a serious auto crash, which slowed her down for a while, but she regained her momentum and was at the top of her game by the time of the plane crash in 1963.

Our first song is one of her lesser known releases, but it showcases her marvelous voice in a heart-breaking ballad, Why Can’t He Be You. We follow that with the classic bluesy tune that also gave Hollywood the title for the story of her life, an oscar-nominated role for Jessica Lange. Of course the song is Sweet Dreams (Of You). Both songs are from the MCA album shown here.