There have been a staggering number of close harmony singing groups formed through the years, but a few of them have some distinctive differences. One of those is the Four Freshmen, a combo that has been around for well over a half-century, during which more than two dozen members have come and gone. Even more unusual is that the quartet is classified as a ‘vocal band’ because as they sing they accompany themselves on musical instruments. 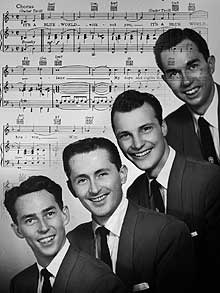 It all began in the late 1940s when four guys at Butler University in Indianapolis put their heads together and began a singing group. Included were brothers Ross and Don Barbour, along with their cousin Bob Flanigan and Hank Kratzsch, and they initially aimed for a barbershop quartet style, like that used by many of the big band singing groups of the era. But in addition to their vocal talents they were all solid instrumentalists so they soon became something very special, a combo that would influence many who came along behind them. Included among them was the Lettermen, the Beach Boys, and Manhattan Transfer.

But it took a while for the guys to get some traction. They began touring the country and appearing wherever they could, and by the start of the 1950s began to get noticed. Their big break occurred when they caught the attention of bandleader Stan Kenton, who helped them get a record contract. And Kenton was a big booster even beyond that, forcing the record company to promote the guys’ music.

The decade of the 1950s was golden for the Four Freshmen, with very strong record sales, and their success would continue in subsequent decades. As the years passed the group kept doing well even through multiple personnel changes, entertaining their many fans and selling records. Some of their records, like “It’s a Blue World” and “Mood Indigo”, did well on the charts, but chart-busting wasn’t in the cards for them. Their forte was generating dozens of albums of the kind of music their fans loved. And even now the Four Freshmen are doing their thing, with an ever-changing roster of performers keeping it rolling.