Your first thought when reading the title of this post might be: wait — aren’t all politicians con artists? Well of course they are, but today we’re going to get specific and tell the story of Dudley Joseph LeBlanc (aka ‘Coozan Dud’), a huckster who became a Louisiana legislator and then made a fortune selling a questionable tonic in a bottle. He also earned quite a name for himself by promoting it in dazzling ways, while hobnobbing with everybody from Bob Hope to Judy Garland, along with Milton Berle, Groucho Marx, and a host of other celebrities.

Born and raised in the Cajun heart of southern Louisiana, LeBlanc spoke only French while growing up but as he began making his way in the world he was a natural at the language of salesmanship. A born peddler and promoter, he put himself (and eventually several relatives) through college by making money in a variety of businesses. Among his activities in those days were a clothes-pressing service and the merchandising of several different products, including tobacco, shoes, crude oil, and funeral insurance — and not one to leave a dollar behind, he also opened a funeral home.

At one point he had to take some time off to serve in the army but that hardly slowed his wheeling and dealing, and he continued to find success. By the early 1920’s he’d decided to branch out into politics and was elected to the Louisiana state legislature, where he was soon butting heads with the establishment represented by the powerful Huey Long. Over the next four decades he would serve a number of terms as both a state representative and state senator, but numerous tries for higher office (such as governor) were unsuccessful. However, he continued to make money in a variety of ways, including the peddling of bottled health remedies. Unfortunately, by the early 1940’s that activity was running into FDA problems so he closed it all down and restarted with a new product he called Hadacol. The name was derived from the firm he started — Happy Day Company — with an added ‘L’ for LeBlanc, but his joke was always, ‘I hadda call it something’.

Hadacol was supposedly made from a secret formula that he’d ‘borrowed’ from a doctor who’d treated him, and the odds are that it didn’t do much in the way of curing anybody of anything. But in addition to assorted vitamins and minerals it was 12% alcohol, so that might have been the real lure to many. (At one point it was even served in bars.) Whatever the case, its popularity steadily grew and LeBlanc managed to keep the FDA at bay, at least in the early years. Later he would scale back his wild claims but by then nobody noticed because it was already so popular.

During its rise he had applied his marketing skills in a variety of ways, including bogus paid testimonials and various promotions, while also advertising on billboards and on his own radio show. He even published a ‘Captain Hadacol’ comic book. But LeBlanc had more tricks up his sleeve and he stepped up the pace again with a new version of an old idea, a spectacular traveling medicine show. A throwback to an earlier America, when traveling con-men and medicine shows were a regular part of the scene, LeBlanc’s Hadacol Caravan was something to behold. Heavily 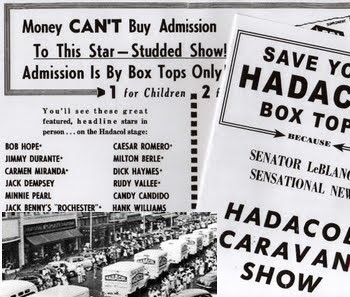 promoted, it included up to 130 vehicles and featured stage shows with an amazing list of stars performing for huge audiences. The best part was that it was sort of free — your admission was via Hadacol boxtops. LeBlanc not only guaranteed huge sales of his product but also made his caravans the biggest attraction in the country. You can read a list of stars on the accompanying picture, but there were others including Mickey Rooney, Lucille Ball, Groucho Marx, Judy Garland, and George Burns and Gracie Allen. One of the biggest attractions for a while was Hank Williams. (Below is a recording of a radio interview he did about Hadacol.)

Songs like “Hadacol Bounce” and “Hadacol Boogie”, some co-written by LeBlanc, became so popular that they continue to find their way into the songbooks of country bands even now. But all good things must come to an end, and even though Hadacol was enormously profitable — $3.50 was a lot of money at that time — the overhead began to weigh down the company and by the 1950’s it was losing money. Always ahead of the game, LeBlanc wasted no time in selling out, netting several million dollars in the process and leaving the inevitable bankruptcy to be dealt with by the new owners. As for him, although he stayed politically active in his later years he spent a lot of his time on something he’d always enjoyed, researching and writing about the history of his Cajun people. His books are now considered some of the best on the subject. He died at age 77 in 1971.