She was proficient on countless instruments but usually played the trumpet, and with such skill that Louis Armstrong declared her second only to himself (which led to her being called ‘Little Louis’). She was also a talented dancer and a marvelous singer, with perfect pitch and the ability to handle everything from jazz to soulful blues. But even though she became an international star, Valaida Snow had more than her share of misfortune — including imprisonment by the Nazis — and is almost forgotten now, almost sixty years after her death. 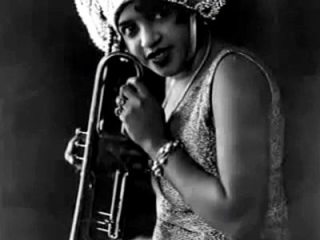 Most sources list her place of birth as Chattanooga, Tennessee, and it was there that Valaida and her sisters, Lavaida and Alvaida, grew up surrounded by music. (And probably a lot of name mix-ups.) Their mother was a music teacher who taught them to play multiple instruments and how to sing and dance too. As a result, the girls all became accomplished artists, but it was Valaida who embarked on a professional career while still in her mid-teens, just about the time World War I was ending.

By the early 1920s Valaida was a fixture on the vaudeville tour, with experience as a featured performer in revues produced by stars like Eubie Blake, and she was soon headlining in Harlem nightclubs. As the decade continued and her fame grew she began getting opportunities to entertain abroad, and not only toured Europe but also the far East before returning later in the decade to again star in nightclubs. In fact, it was in a Chicago club that she met up with Louis Armstrong (and it was also about then that she made a love connection with another star, pianist Earl Hines). But even though she continued to wow many people she was mostly considered a curiosity by the jazz elite, who couldn’t believe a woman — and a black one, at that — could really be one of the best musicians around.

Even if there were those who didn’t appreciate her talent, Valaida was in her prime throughout the 1930s; making records, starring in clubs, and even showing up in the occasional small movie part — which she also did later in the decade when she returned to Europe. (You can see an excerpt from a French film below, and it’s about the only surviving clip of her in her prime.) Unfortunately, she was later caught up in the start of World War II and spent a couple of years in a concentration camp before being released in a prisoner exchange. Although she returned to performing and bravely tried to sing and play trumpet as well as before, she often struggled to do so, and her ordeal was thought by many to have shortened her career. She was just 52 when she died in 1956.