Now 82 years old, actor/singer Jim Nabors was in the news earlier this year when he traveled from his home in Hawaii to Seattle (where same-sex marriage is legal) to marry his long-time partner. Although he hadn’t publicly acknowledged being gay before that, it wasn’t much of a surprise to most folks because he’d been pretty open about it for years. In fact, people were probably more shocked by something that occurred with him more than forty years earlier when his iconic TV character Gomer Pyle started singing. 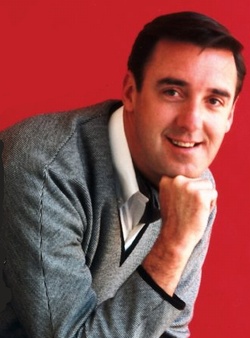 Although he became famous playing a hayseed, the Alabama native had a college degree in business, and during the 1950s spent some time in New York and later Nashville, where he began working behind the scenes in TV. Later in the decade he moved to the Los Angeles area, where he continued in similar jobs but also began to work part-time in area night spots. Although his club appearances were mostly about him singing, he also threw in some comedy bits that hinted at the future Gomer Pyle. Eventually Andy Griffith caught his act and hired him for what was supposed to be a one-shot appearance on his TV show. Nabors proved to be so popular with viewers that he became a regular on the show, and a couple of years later starred in a spin-off of his own, Gomer Pyle USMC.

Even though Nabors had exhibited his deep baritone elsewhere, including the occasional TV variety show, he didn’t really attract a lot of notice for it until he got the opportunity to break out in song on his own show, early in its fourth season. Most fans of Gomer Pyle USMC had no idea what they were going to hear, but they were floored when he performed a booming version of “The Impossible Dream” from Man of La Mancha.

Nabors continued to show up in various acting roles for many years, but his singing gradually became the driving force in his career. He hosted his own TV variety show for a while and has appeared in other venues too, but his biggest success has probably been in record sales. In addition to ballads and show tunes, he’s had countless best-selling albums of inspirational songs, and has enjoyed especially strong sales with holiday albums. He remains a fan favorite.