Although he died well over three decades ago, it would be difficult to find someone who isn’t pretty familiar with Elvis Presley and his music. One reason for his continuing fame might be the countless impersonators we’ve been exposed to through the years, and I’m not just talking about those who often flock to Las Vegas or Memphis for special events. It’s been estimated that there are thousands of faux Presleys performing worldwide — one of them was even elected mayor of a small town not too far from where I live. 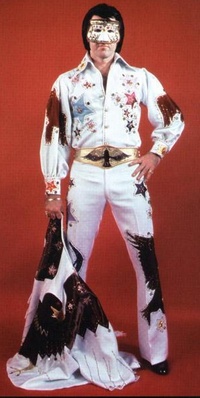 But here’s something you might not know or remember. There were numerous impersonators making a pretty good living even while Elvis himself was still around. And in the years immediately following his death they seemed to multiply, with many of them happy to feed rumors that the King had been reborn. But one of the most interesting characters of all might have been a guy named Jimmy Ellis, who performed under the stage name of Orion and sounded like Presley, but didn’t really consider himself to be an impersonator.

Born in Mississippi and raised in Alabama, James Hughes Bell took the stage name Jimmy Ellis when he first began his career in the mid-1960s. Still just a teenager, he didn’t really make a big splash in the early years, but he did make a record or two while also picking up a lot of experience. In the early 1970s he ended up at Sun Studios, where his uncanny ability to sound like former client Elvis Presley intrigued producers. They soon issued a record of him singing two of the King’s hits — “That’s Alright Mama” and “Blue Moon Of Kentucky” — with the artist’s name shown as ‘?’. There’s no way to know how many people thought Presley himself was the mysterious singer (he was still alive at that time) but over the next few years Ellis continued to utilize his sound-alike voice in various ways, even after Presley died — like showing up as a mysterious ‘friend’ (via overdubbing) on records by guys like Jerry Lee Lewis.

His big breakout occurred when he supposedly contacted a writer and claimed to be the real Orion — the subject of her upcoming book about a singer who’d faked his death (one of the many myths swirling around Elvis Presley). There’s not much doubt that there was a lot of truth-stretching on both sides during the whole process, but the mysterious masked entertainer became a sensation for a period of several years, selling a lot of records while also helping propel sales of the book. Unfortunately things eventually slowed down for Orion, and after confessing that he was really Jimmy Ellis — not much of a secret by then — he eventually left the music business behind. Tragically, he was gunned down (along with his wife) in his Alabama pawn shop in 1998. He was only 53 at the time.

2 thoughts on “Elvis Has Achieved A Type Of Immortality”