By now, most of us have read that legendary jazzman Dave Brubeck has died, just one day before what would have been his 92nd birthday. Amazingly, he was musically active — and relevant — almost to the end. 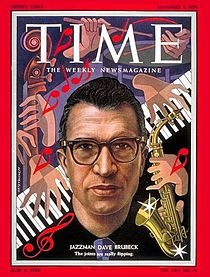 You can read about him in any one of a number of extended obituary pieces that are available online, but since he had already made many appearances on the GMC — and because he was special to me — I decided to approach my posting a little differently.

Below are links to four of the GMC pieces that have featured him.

At the bottom I’ve placed a video of Brubeck’s quartet performing an extended, richly improvisational version its best-known song.

From 2006, one of the first posts on the Geezer Music Club was one I titled The Early Days Of Modern Jazz…

A little later that year came a review of an album: REVIEW: Dave Brubeck Quartet – Best Of Brubeck 1979-2004

And finally, a quirky little post from 2010: Bye-Bye To Brubeck Bossa Nova