If you were a fan of Arthur Godfrey when he was a popular radio and TV host in the 1940s and 1950s, you probably remember the volatile star’s on-air firing of popular crooner Julius La Rosa. What you might have forgotten is the name of his musical director in those days, a guy who had a lot to do with Godfrey’s success — and was himself fired shortly after La Rosa. That would be Archie Bleyer. 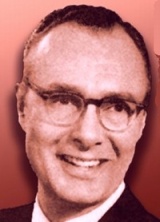 Bleyer was a New Yorker who had originally planned a career as an engineer, but dropped out of Columbia in the late 1920s to pursue music. A skilled pianist, he also found plenty of work as an arranger and by the early 1930s was even leading his own band, one that leaned toward ‘sweet’ music.

In the 1940s Bleyer began his association with Godfrey, first on radio and later on TV. It was a period of his life that would be important in a number of ways. For one thing, he met and married Janet Ertol of the Chordettes, a very popular singing group that owed a lot of its success to Bleyer (and Godfrey’s show). Bleyer also learned a lot about the production side of the business, which would help him long after he was tossed off the show in 1954 and began devoting all his time to Cadence Records, the company he’d formed around Julius La Rosa.

Cadence flourished for a few years, with La Rosa and – of course – the Chordettes selling a lot of records, and Bleyer also made a few of his own, leading an orchestra and spinning out hits like “Hernando’s Hideaway.” He kept expanding by signing a number of rising stars, including Andy Williams and the Everly Brothers. (Phil Everly also became his son in law.) But by the early 1960s things were slowing down and Bleyer was not particularly happy with the direction music was headed. He sold the remnants of the company to Williams and retired to Wisconsin where he lived until his death in 1989.