Although the Kalin Twins were contemporaries of the early Everlys and might have had some things in common with the legendary duo, they came up short in most ways related to music. But Herbert and Harold Kalin — who both died a few years back — did enjoy a nice career, peaking with their 1958 hit, “When.”

Born and raised in suburban New York, Herbie and Hal were very interested in music as they were growing up, and by their teen years they were discovering R&B and a few other types that had n 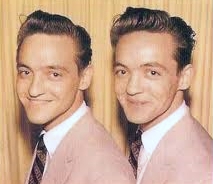 ot been available on their parents’ record player. They were determined to try for a musical career, and by the time they’d reach adulthood (and fulfilled service obligations) they were ready to try their luck.

Moving to Washington, the Kalins soon partnered up with experienced songwriter Clint Ballard, who had the connections to get the brothers a chance with Decca Records. Record sales were slow with their first efforts, but they eventually hit pay dirt with “When,” which rose near the top of the charts — and did even better in Great Britain, where it hit number one.

For a while things went very well for the Kalins, with several new records and occasional regional TV appearances, but they decided they could do even better in Nashville. It was there that they might have most closely approached the Everly style — whether or not that was their intention — with their recording of “Sweet Sugar Lips,” a song written by the Bryants, the husband and wife team who furnished many of the Everly’s biggest songs.

It sold well, but neither it nor later records would ever approach the success of the Kalins’ first hit, and even though they spent some time touring abroad, things spiraled down from there. In later years they would occasionally reunite as a singing duo, but with limited success. Hal died in a car accident in 2005, and Herbie less than a year later (from natural causes).

One thought on “Kalin Twins Reminiscent Of Everlys”