All-girl singing groups have been a part of music for a long time, and have often featured singing sisters. During the heyday of the big bands, groups like the Andrews Sisters were big stars, and in later decades there were pop groups like the Shangri-Las and others, but there were some that stretched across both eras. One group that found a measure of success was the Paris Sisters, a trio that had a big hit with “I Love How You Love Me.”

The sisters — Albeth, Sherrell, and Priscilla — grew up in San Francisco, and were groomed for music stardom from childhood. Their mother was an unfulfilled former opera singer, and she wasted no time in pushing her young girls into music. A good example of her drive was when she 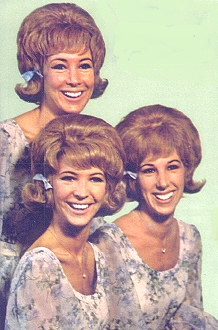 finagled a meeting with the Andrews Sisters, whom the girls often emulated. They were so taken with the youngsters that they allowed them on stage during their show.

The Paris Sisters soon had a recording contract, and even though sales of their early records were uneven, the group continued to work hard, performing everywhere from county fairs to Vegas lounges. (Complete with forged birth certificates, wigs, makeup — and strategic padding.) But as the decade wore on, stardom continued to elude the trio, and even a change of record companies didn’t help — in fact, they stopped making records for several years.

Things began to improve for the girls in the early Sixties after they signed a new recording contract and began working with producer Phil Spector. He made youngest sister Priscilla the lead singer and had her sing in a soft and breathy style more suited to current pop music. Success soon followed, with the group’s second record in the new style, “I Love How You Love Me,” rocketing almost to the top of pop charts.

Subsequent records, like “He Knows I Love Him Too Much” and “What Am I to Do,” also did well but fell quite a bit short of the success of their big hit, and things began to go a little downhill. There was also a lot of turmoil going on in the business end of things, and that probably didn’t help. However, the girls did continue to make records, and later in the decade Priscilla began to develop a solo career — although the sisters would still reunite from time to time.

Eventually the two older sisters left the performing side of the business behind, while Priscilla would continue to entertain throughout most of the next couple of decades. In later years she often appeared in Europe — she was especially fond of her namesake city, Paris — and plans were being discussed for a Paris Sisters reunion when she died in 2004.